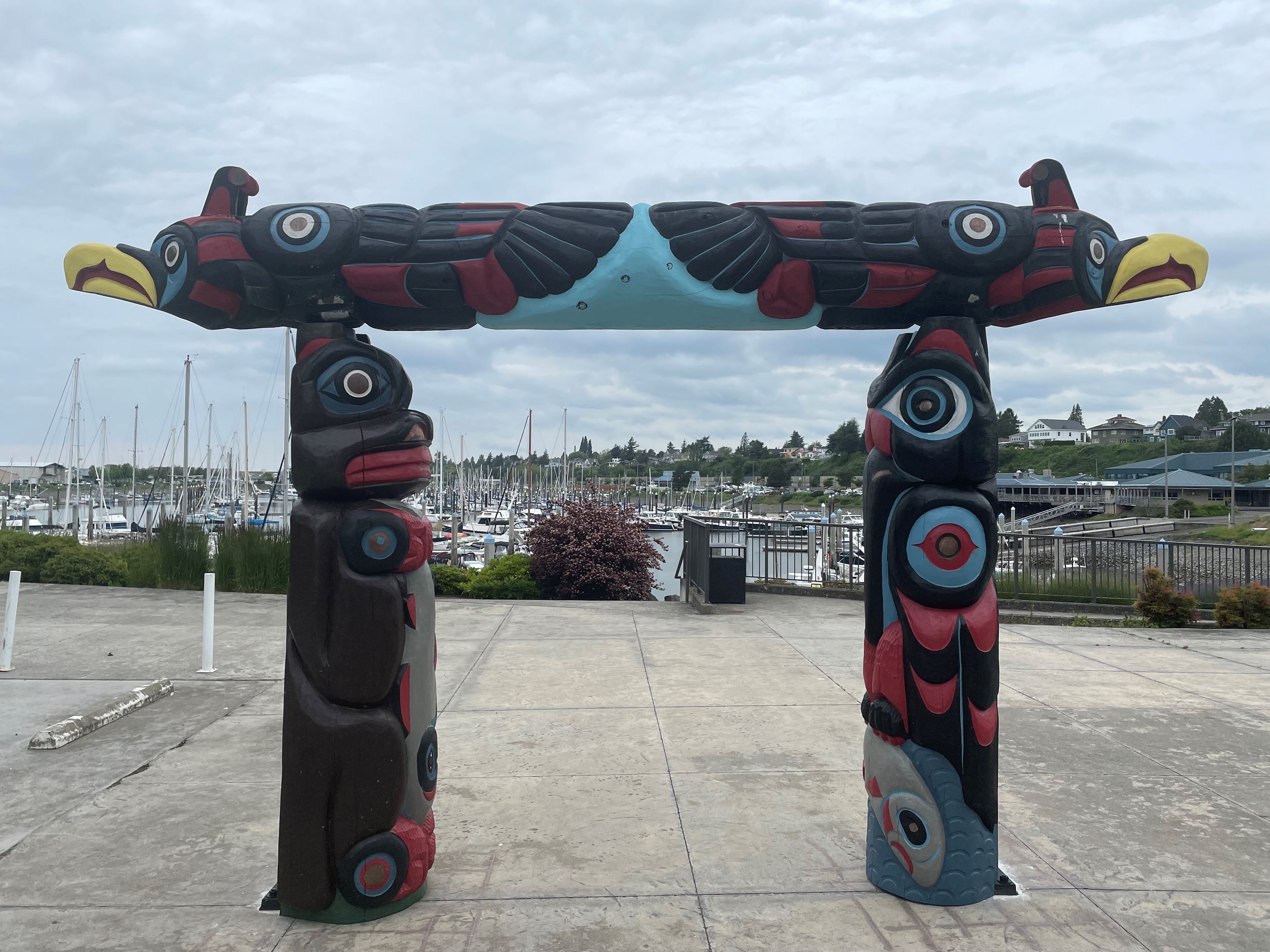 The Double Thunderbird located behind 23 Bellwether Way along the Squalicum Harbor Promenade was carved by Jewell James, Master Carver with the Lummi Nation House of Tears Carvers

Raven and Salmon Pole: At one time, in the distant past, the Native People were suffering a great famine. Raven (their leader) journeyed in search of food for his starving people. After a great journey, Raven was suffering and near death, so he started to sing his death song, Salmon Woman heard him and approached Raven about his sad condition. After hearing his story of suffering by his people, and his personal sacrifice, she agreed to gift her children (the Salmon) to the People of Raven, so that they may survive, provided they shall always honor and respect the sacrifice of the salmon children. Raven and his new bride (Salmon Woman) returned to his village, bringing the Salmon Children to the Rivers.

Bear and the Steelhead: Raven had a brother… Bear. Bear’s wife was pregnant. The female creative power of birth is beyond all powers of men. So, according to tradition, Raven had to fish and hunt for brother Bear’s family. Bear being so close to his wife could have her power overwhelm him and  cause damage to the gifts of nature. Bear being restless, decided he should fish or hunt for his own family, regardless. So he went fishing in the upper river area, where not people lived, but where the salmon children slept. As he touched the different species they began to die off. He touched the chinook, coho, sockeye, pink, and chum salmon children. They all died and floated past the village of the people. Desperately, the people sent for Raven so that he could stop his wayward brother. Raven stopped Bear before he could touch steelhead. Now, all the different species of salmon die in the spawning grounds, except steelhead- who returns to the House of the Salmon Chief under the Ocean year after year.

Thunderbird: Many tribes have Thunderbird as a power symbol. But, the Xwlemi tell the story of how they lost the Gift of Thunderbird. This great being slept (hibernated) underground. When the people needed help they conducted a specific ceremony to awaken Thunderbird. Once he rose from the ground, they fed Thunderbird. After being fed he then helped the people as they requested. When he finished he returned to his sleep. The Children were never to be involved in this Awaking Ceremony. Some children hid in the brush and learned to mimic the ceremonial process. Once the adults were gone they enacted the ceremony and awoke Thunderbird. They did this over and over, and never asked for help or fed him. Because the people failed to control and teach their children, Thunderbird shook off his fleas (frogs) and then flew north. From that time after, at the Place of Frogs, the fleas sing their songs constantly, keeping the Xwlemi people awake. This is how Thunderbird reprimanded the Xwlemi, as a reminder to teach the children respect for ceremonials.